Unemployment rates rose in 83 Kentucky counties between April 2016 and April 2017, fell in 28 and stayed the same in nine counties, according to the Kentucky Office of Employment and Training, an agency of the Kentucky Education and Workforce Development Cabinet.

In contrast to the monthly national and state data, unemployment statistics for counties are not seasonally adjusted. The comparable, unadjusted unemployment rate for the state was 4.8 percent for April 2017, and 4.1 percent for the nation.

Unemployment statistics are based on estimates and are compiled to measure trends rather than actually to count people working. Civilian labor force statistics include non-military workers and unemployed Kentuckians who are actively seeking work. They do not include unemployed Kentuckians who have not looked for employment within the past four weeks. The statistics in this news release are not seasonally adjusted because of the small sample size for each county. The data should only be compared to the same month in previous years.

Kentucky’s seasonally adjusted preliminary April unemployment rate was 5.1 percent, according to the Office of Employment and Training (OET), an agency of the Kentucky Education and Workforce Development Cabinet. The unemployment rate for April 2017 was up 0.1 percentage points from the 5 percent reported in March 2017.

The preliminary April 2017 jobless rate was 0.1 percentage points higher than the 5 percent rate recorded for the state in April 2016.

The U.S. seasonally adjusted jobless rate for April 2017 was 4.4 percent, according to the U.S. Department of Labor.

Labor force statistics, including the unemployment rate, are based on estimates from the Current Population Survey of households. It is designed to measure trends rather than to count the actual number of people working. It includes jobs in agriculture and those classified as self-employed.

Akers said that the unemployment rate increased because more individuals are entering the labor market. “The increase in the unemployed rate for April appears to reflect workers who are returning to the labor force. Individuals who stopped looking for work over the past few years appear to be searching for employment again as the state’s economy has improved,” she said.

In a separate federal survey of business establishments that excludes jobs in agriculture and people who are self-employed, Kentucky’s seasonally adjusted nonfarm employment increased by 600 jobs in April 2017 compared to March 2017.

“The establishment survey indicates employment increased in April, however the number of jobs added in April was lower than in the past few months,” Akers said.

Nonfarm data is provided by the Bureau of Labor Statistics’ Current Employment Statistics program. According to this survey, five of Kentucky’s 11 major nonfarm North American Industry Classification System (NAICS) job sectors registered gains in employment, while five declined from the previous month and one was unchanged.

The construction sector and the education and health services sector each added 1,500 jobs in April 2017.

Other services, which includes repairs and maintenance, personal care services, and religious organizations, increased by 800 jobs since March 2017 and 1,900 since April 2017.

Information sector jobs remained steady in April 2017 but has risen by 1,200 jobs since April 2016. The industries in this sector include traditional publishing as well as software publishing; motion pictures and broadcasting; and telecommunications.

Manufacturing declined by 2,900 jobs since March 2017. “Manufacturing employment varies from month-to month. While April showed a decline, the number of manufacturing jobs in Kentucky has steadily increased since the recession,” Akers said.

The mining and logging sector declined by 200 jobs in April 2017.

Kentucky’s statewide unemployment rate and employment levels are seasonally adjusted. Employment statistics undergo sharp fluctuations due to seasonal events, such as weather changes, harvests, holidays and school openings and closings. Seasonal adjustments eliminate these influences and make it easier to observe statistical trends. However, because of the small sample size, county unemployment rates are not seasonally adjusted.

Learn more about the Office of Employment and Training at http://www.kylmi.ky.gov/. 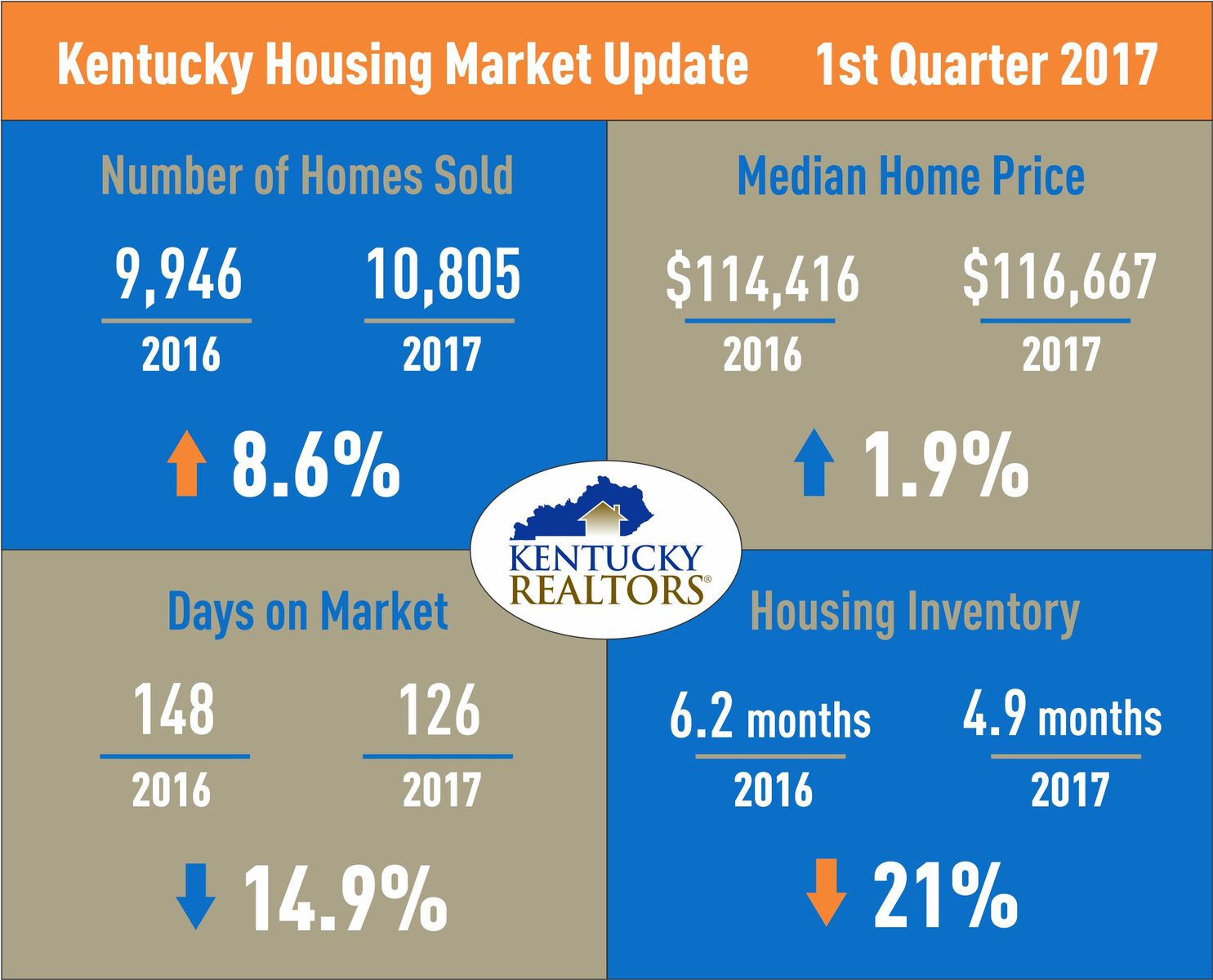 Overcoming a few dips in the first three months of the year, the Kentucky real estate market finished the first quarter on the up-swing. Total home sales rose 8.6 percent, from 9,946 in 2016 to 10,805 in 2017, during the first quarter of the year. The increase comes at a time when the time it takes for a property to sell dropped 22 days, or almost 15 percent, from the same period last year. Housing inventory also declined 21 percent ending at 4.9 months of supply.

“Home shoppers are out in the market and buyer demand is heating up this spring season,” said Mike Becker, president of Kentucky REALTORS®. “We are seeing more competition for the inventory available which may explain the bump in home prices.”

As the spring housing market usually signals an uptick in activity, March also saw inventory levels hit 4 months of supply while days on market dropped to 124 days, from 146 this time last year.

“Qualified buyers need to enter the market with a strong game plan – a budget defined, financing in place, desired neighborhoods selected – and then be ready to make a decision when they find a home that meets their needs,” stated Becker. “Competitively priced homes are being snapped up in a matter of days, especially those in price ranges that capture starter homes and the first-time home buyer market, which varies depending on what part of the state you are in.”

At the national level, the first quarter saw home sales at its strongest in a decade and prices that have experienced monthly increases for 61 consecutive months.

According to Lawrence Yun, the National Association of REALTORS® chief economist, continual supply shortages ignited faster price appreciation across the country in the first quarter. He said that an increased buyer presence led to a boost in sales while new listings failed to keep up and hovered around record lows all quarter.

But that may change as interest rates have, so far, remained low throughout the year and home building is starting to ramp up across the state. Nationally, new home starts have been on the increase for several consecutive years and the National Association of Home Builders chief economist Robert Dietz has forecasted a 9-10 percent gain in new housing starts in 2017 and 2018.

“The newest Housing Opportunity Index reports that housing affordability improved in the first quarter of 2017 due, in large part, to rising wages and better economy,” stated Becker. “The housing market may stay busy for a while, especially when the biggest home buying demographic, the Millennials, are ramped up – over 94 percent of that generation wants to own their own home.”

Kentucky REALTORS® is one of the largest and most influential associations in Kentucky. Founded in 1922, Kentucky REALTORS® represents more than 10,300 REALTORS® who are involved in all aspects of real estate, including residential and commercial real estate brokers, sales agents, developers, builders, property managers, office managers, appraisers and auctioneers.

The legislature did not address tax reform this session. Governor Bevin and legislative leaders have repeatedly said that everything is on the table and to expect a special session later this year. Throughout the session, groups representing every aspect of our economy reached out to elected officials defending their preferred tax credit, deduction and program.

In the near future, Governor Bevin will produce his version of tax reform and promote it to the state legislature and the public in preparation for the special session. Kentucky REALTORS® will remain engaged on the important issue to defend homeownership and encourage economic growth.

As the Governor and the General Assembly review the entire tax code, evaluating rates, exemptions, credits and incentives, it is important to understand how vital the current real estate tax provisions are to the housing market and the overall economy. Kentucky REALTORS® will strongly oppose policies that will negatively impact home sales and put homeownership out of reach.