The Kentucky Real Estate Commission (KREC) is excited to announce the launch of a new online services portal. The portal will provide licensees with expanded online services, including the ability to view and edit your licensing profile, initiate licensing changes, and process other licensing requests electronically.

In order to access the portal, you must login and create a NEW ACCOUNT using your Social Security number OR the identification number (OP_ID) that was sent in an email from the Kentucky Real Estate Commission on November 22 and resent on December 8. If you don't have the OP_ID, you will need to contact the Kentucky Real Estate Commission at ppc.krec@ky.gov or (888) 373-3300.

Once you click the online services link, you will need to click the 'Create Account' link on the right side of the screen. When you enter your information on the next screen, you will select 'Individual Access' in the 'User Type' box.

After creating your account, you will receive a new license number. Please note, you will still be able to reference your old license number as a legacy number for all searches.

As a result of the online services transition, your firm name, licensee name, or business address may have been inadvertently misspelled or abbreviated. If you would like to correct or change this information, KREC's $10 change fee will be waived for 30 days. Please make any corrections by midnight on Thursday, February 15 using the online services system. After that time, a $10 fee will be reinstated for changes.

Create your account today and begin using the exciting new features provided by the online services portal. Thank you for your cooperation and patience as KREC completes this transition. If you have questions, please contact the Kentucky Real Estate Commission at ppc.krec@ky.gov or (888) 373-3300.

OP_ID is a unique number that KREC (and the Public Protection Cabinet) can reference to identify an individual instead of utilizing his/her social security number. It is an abbreviation for Occupations and Professionals.

What happens if licensees/brokers do not create a new account before February 15, 2018 (extended date)?

You will be charged $10 transfer fee. In addition, you will also want to ensure that, during the transfer of all the data (name, address for both residential & firm) from the old system to the new system, that all your information transferred correctly without errors. When creating your account, please check to make sure all data is correct. If the firm name or firm address is incorrect, the principle broker can make corrections by February 15 at NO CHARGE - after February 15, 2018 there will be a $10 charge for corrections. Also, a new account must be created by the renewal deadline of March 31, 2018 or brokers and agents will not be able to renew online.

Kentucky housing market heats back up in October
Monday, December 4, 2017 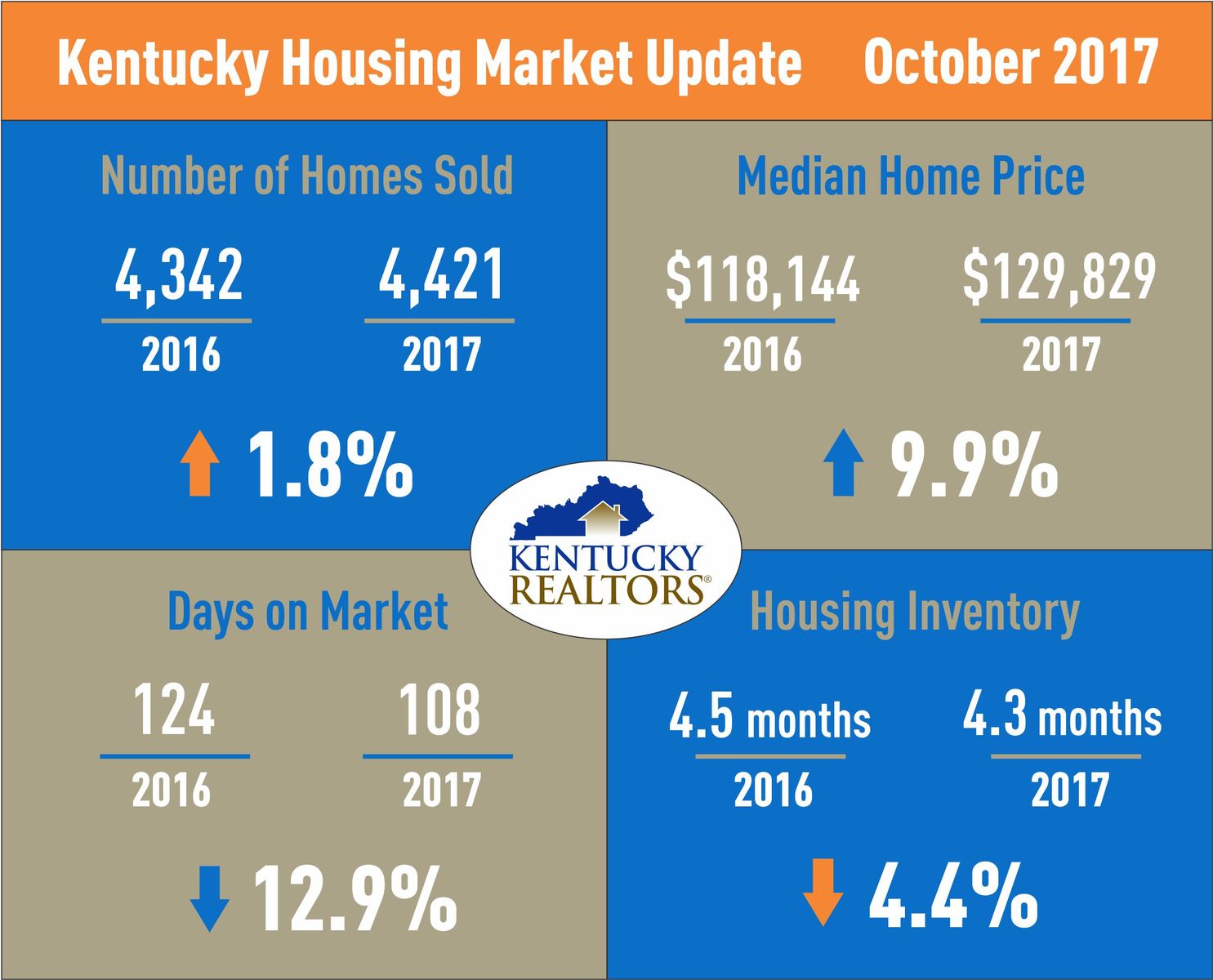 After slipping a bit in September, the housing market in Kentucky picked up in October following the national trend for the month. The number of homes sold in October rose 1.8 percent to 4,421 sold versus 4,342 sold in 2016. For the year, the number of homes sold jumped to 45,236, up from 43,905 in 2016, for a 3 percent increase. At this pace, 2018 is on track to break last year’s record for the most homes sold in a calendar year.

Nationally, total existing home sales increased 2 percent to a seasonally adjusted annual rate of 5.48 million in October from a downwardly revised 5.37 million in September. After the increase in October, sales are at their strongest pace since June, but still remain 0.9 percent below a year ago.

The Commerce Department reported that new home sales increased 6.2 percent to a seasonally adjusted annual rate of 685,000 units in October, making it three straight months for improvements. That was the highest level since October 2007 and followed September's slightly downwardly revised sales pace of 645,000 units.

Lawrence Yun, NAR chief economist, says sales activity in October picked up for the second straight month, with increases in all four major regions, including the South, up 1.9 percent, which includes Kentucky. "Job growth in most of the country continues to carry on at a robust level and is starting to slowly push up wages, which is in turn giving households added assurance that now is a good time to buy a home," he said. "While the housing market gained a little more momentum last month, sales are still below year ago levels because low inventory is limiting choices for prospective buyers and keeping price growth elevated." 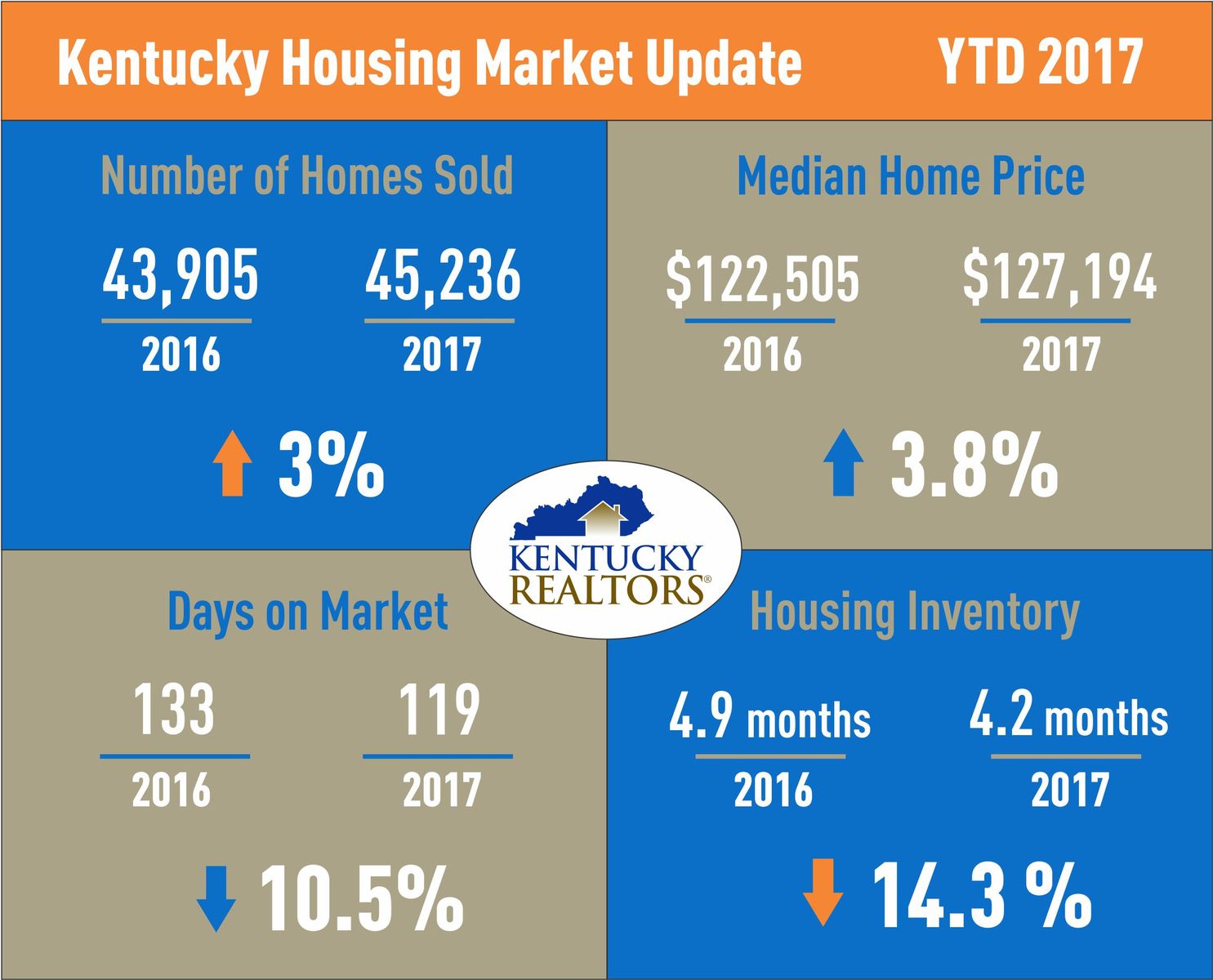 “The housing market is still very competitive,” said Mike Becker, president of Kentucky REALTORS®. “The weather is cooling off and activity usually levels off in the last few months of the year. That doesn’t seem to be the case, as foot traffic and overall sales are continuing on a record pace. Based on year-to-date information, 2018 may turn out to be the busiest year we’ve ever seen despite the low levels of inventory.