DAYS ON MARKET REACH LOWEST ON RECORD FOR THE STATE 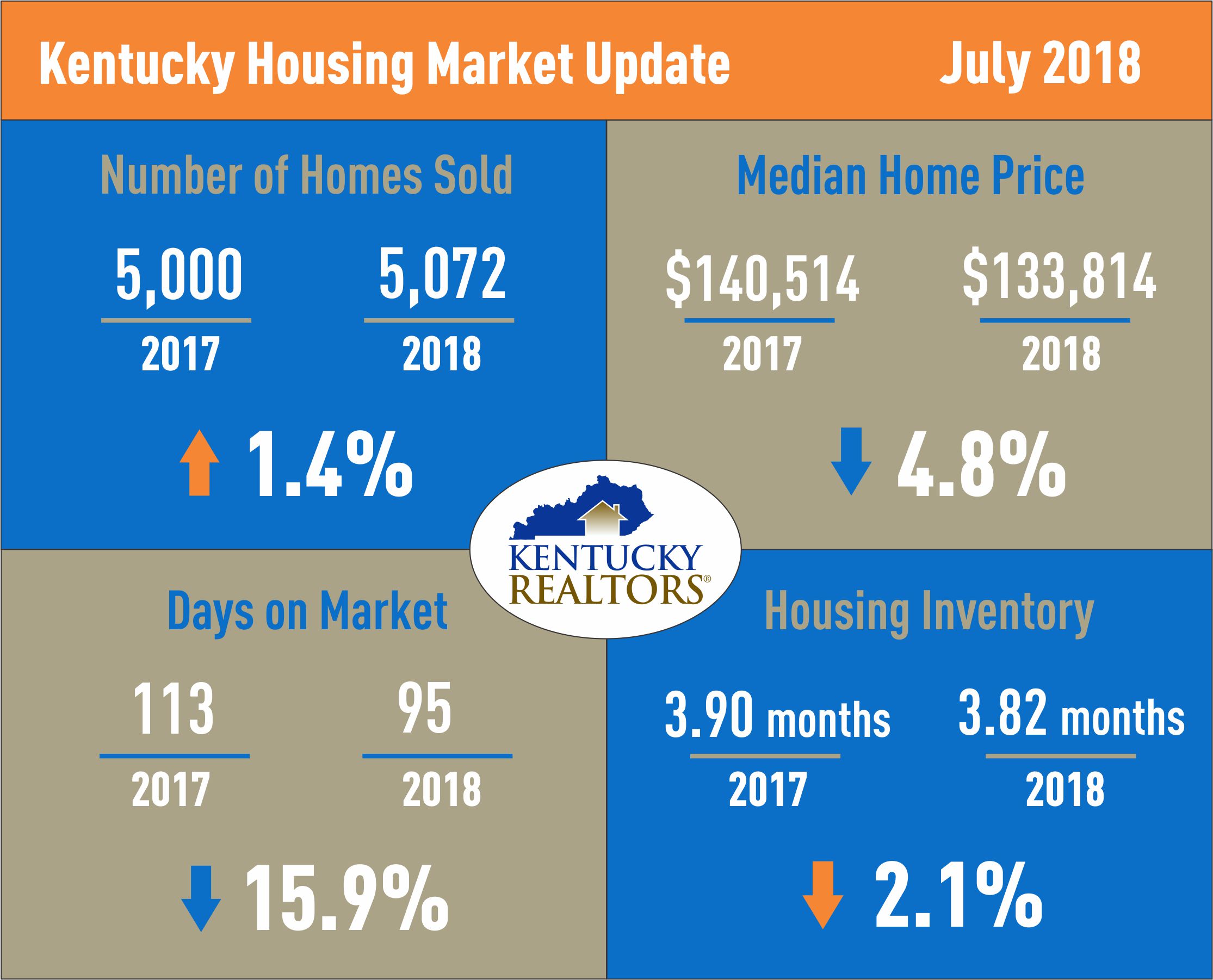 Nationally, home sales have fallen for five straight months, decreasing less than one percent from June 2018 to July 2018, but are 1.5 percent below a year ago. The forecast from Lawrence Yun, NAR chief economist, is that home sales may decrease one percent for 2018 and then rise 2 percent in 2019. Across the state, total home sales may end lower than in 2017, however, this year should stand as the second highest on record.

“The market has been hard to predict in 2018,” said Steve Cline, president of Kentucky REALTORS®. “We are seeing ups and downs in overall sales and the trends aren’t following the national patterns. The dynamics at play are low inventory and mortgage rates, coupled with a strong economy and high housing demand, making it tough to gauge what will happen from month to month.”

"Properties priced correctly are being scooped up fast,” said Cline. “The market is still hot in most areas of the state, making it difficult for would-be buyers to move on a house before it’s gone.” 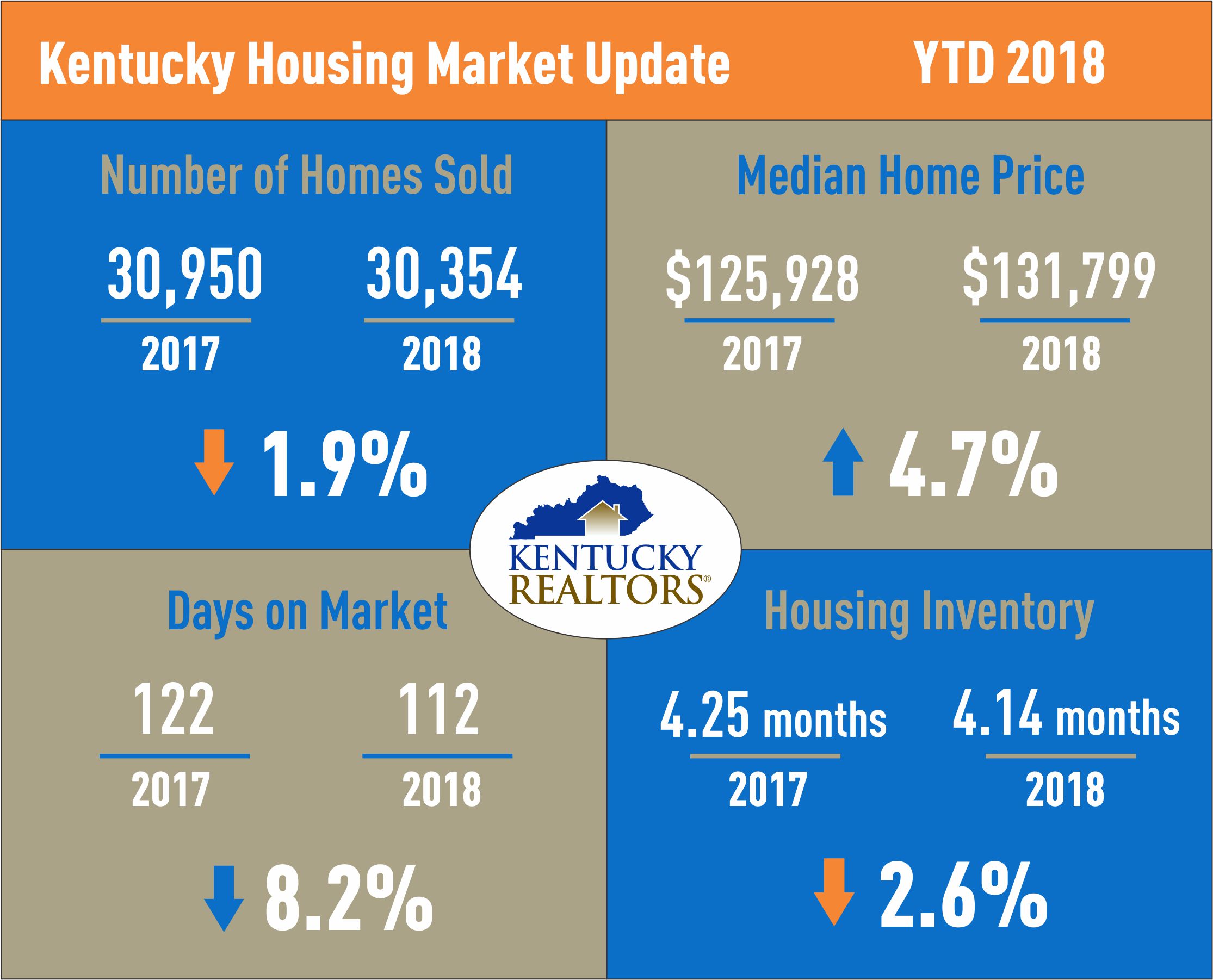 “Because Kentucky has a low cost of ownership, many people are looking to purchase instead of rent,” continued Cline. “With a lower than usual supply of homes on the market, demand has been pushed higher and in July, it seems lower priced homes outside the metro areas made up the bulk of transactions as an overall price decline was reflected across the state.”

Median prices were up in the three largest areas of the state – Louisville, Lexington and Northern Kentucky.

Looking forward, Yun has said that rising inventory levels, if new home construction can finally start picking up, would help slow price appreciation, help aspiring first-time buyers and be good for the long-term health of the nation’s housing market.

The preliminary July 2018 jobless rate was down 0.7 percentage points from the 5 percent recorded for the state in July 2017.

The U.S. seasonally adjusted jobless rate for July 2018 was 3.9 percent, down 0.1 percentage point from the 4 percent reported for June 2018, according to the U.S. Department of Labor. Read More

Prices and inventory on the rise throughout the state 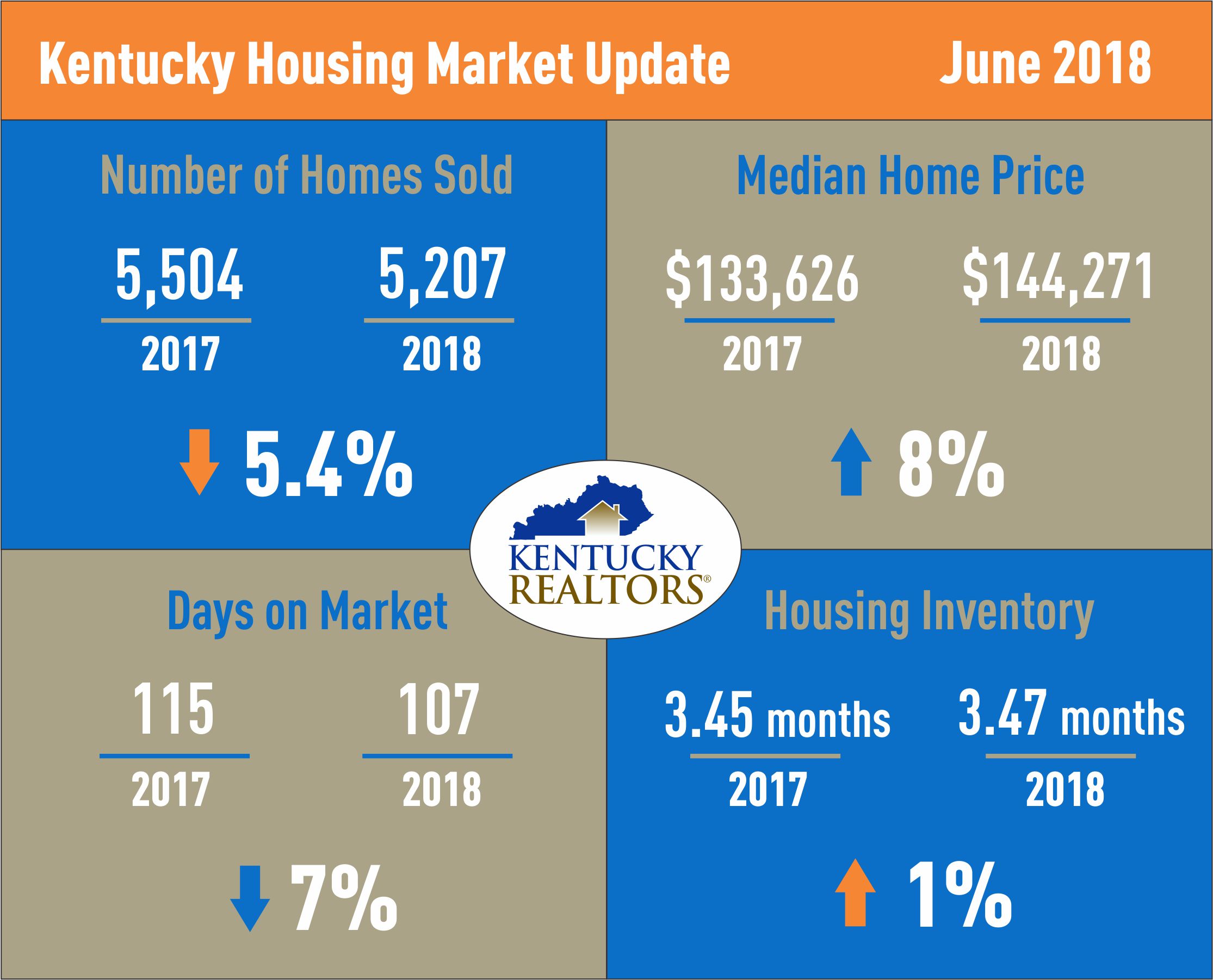 Across the country, sales were down slightly for the month, with the National Association of REALTORS® (NAR) reporting a decrease of 2.2 percent when compared to June 2017.

Lawrence Yun, NAR chief economist, said closings, on the national front, fell on an annual basis for the fourth straight month as there continues to be a mismatch between the growing homebuyer demand in most of the country in relation to the actual pace of home sales, which are declining. He continued by saying the root cause is without a doubt the severe housing shortage with available properties going under contract very fast. This dynamic is, in turn, keeping home price growth elevated, pricing out would-be buyers and ultimately slowing sales. 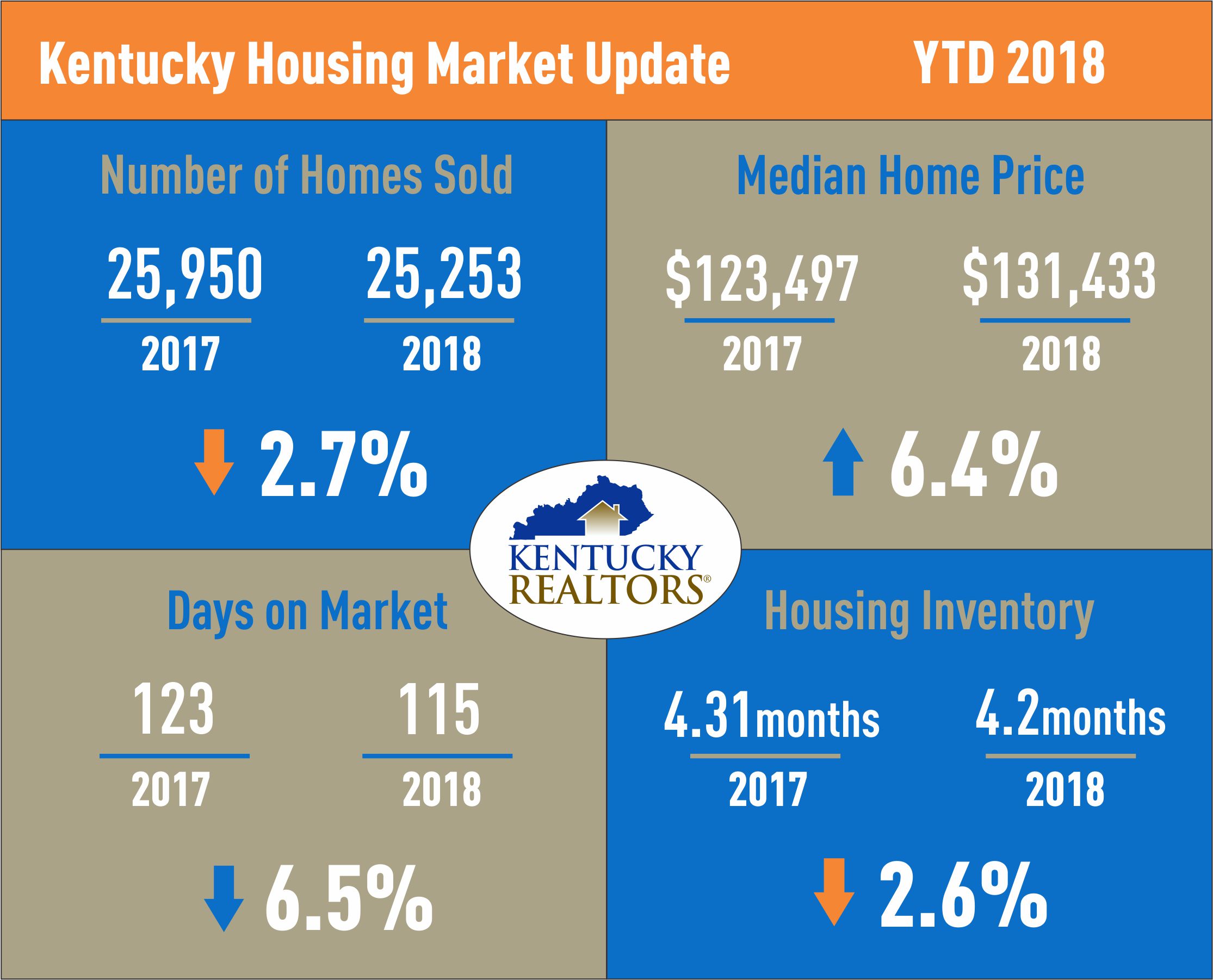 The state’s housing inventory rose year-over-year for the first time in 2018, with 3.47 months of supply in June, slightly higher than it was in May 2018 and in June 2017. For the year, however, inventory is down 2.6 percent versus the same period in 2017. Nationally, housing inventory is 0.5 percent above a year ago, which is the first year-over-year increase since June 2015. Inventory levels across the U.S. stand at a 4.3 month supply.

“Properties are not staying around on the market very long,” said Steve Cline, the 2018 president of Kentucky REALTORS®. “Even though the inventory shortage didn’t show a statistical decline in Kentucky, homebuyer demand continues to strengthen in many markets and there just aren’t enough homes currently available to satisfy the demand, especially in the more affordable price ranges.”

This is evident when looking at the days on market (DOM), which shows how many days a home has been actively listed for sale. In Kentucky, days on market has dropped to just under 115 days for the first six months of the year, down 6.5 percent over 2017 when it was at 123 days. In June, DOM dropped to 107 days, from 115 in June 2017, a decrease of 7 percent. On the national level, the amount of time a property stayed on the market is surprisingly low, with NAR reporting 26 days in June, down from 28 days a year ago. Fifty-eight percent on homes sold in June across the country were on the market less than a month.

“The current level of homes available in Kentucky is far from what’s needed to satisfy demand levels,” added Cline. “And given the fact that the growing economy is bringing more potential buyers into the market and new home construction is still below where it needs to be, this demand is driving up prices in many parts of the state.”

“Even with the upward momentum of prices for homes in Kentucky, they are still affordable when compared to the national picture,” said Cline. “In addition, reports are showing that a national trend of increasing supply may be playing out and if this proves to be true, prospective buyers will begin to see more choices and a softer price growth as we move forward.”

Convention attendees receive a discount and can sign up for this course when registering for the event.

Do you dream of selling 60 homes or more per year, but aren't sure where to begin?  Whether you are looking to jumpstart your business or just starting out, the RRC One Day Course, Zero to 60 Home Sales a Year (and Beyond) will help you accelerate your home sales and create a continuous flow of business. Learn new marketing methods that will help you position yourself as the REALTOR® of choice in your area.

Upon the successful completion of this course, you will be able to: